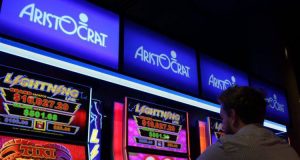 Aristocrat Leisure Limited is an Australian casino software and product developer. With headquarters based in Sydney, Aristocrat is the most popular casino developer in Australia, and the second largest developer in the world behind the American company IGT.

Aristocrat produces a wide variety of casino gaming products for regions around the world, including land-based gaming machines and online slot software. With a long history in the casino industry, players of their games may be interested in exploring Aristocrat gaming at a closer look.

The Origins of Ainsworth Consolidated Industries

Aristocrat’s history began in Australia during the 1950’s, although its initial roots traced back to years before that. Decades prior in the 1930’s, Ainsworth Consolidated Industries was opened – this was the company which would later grow to become Aristocrat.

However, it was only two decades later that Leonard Ainsworth took control of the company and began producing slot machines solely for the Australian market. Ainsworth focused the entirety of the company on producing gaming products, which ultimately led to its success in Australia and internationally.

Just three years after Ainsworth took over the company, slot machine gambling was made legal in New South Wales. It was then that the company took the opportunity to introduce their first Clubman slot machine to the public gaming market, and it was soon featured in pubs and casinos across the country.

The game was a definite success, and Ainsworth Consolidated Industries soon expanded internationally, opening offices in Europe in the 1960’s. In fact, Clubman is considered to be the predecessor to today’s modern slots, as it was the very first game to offer players multiple paylines and scatter symbols.

Aristocrat’s Move to the USA

The company that would later become Aristocrat entered the US market in 1964, the same time at which they released their Aristocrat Nevada slot machine game.

Ainsworth Consolidated Industries continued to grow throughout the 1970’s and 1980’s, using video arcade pinball machines as their inspiration for new slot machine games. This inspiration has created many of the video slots that players still play today.

During the 1990’s, the company began exporting its games to South America, and it went public in 1996. At this time, the company also rebranded itself from Ainsworth Consolidated Industries to Aristocrat Leisure Limited, the name it still goes by today.

A year later, Aristocrat launched its Hyperlink online gaming system, which allowed the creation of many Aristocrat online slots that are still enjoyed today.

Today, casino players can still play a variety of Aristocrat slots, both on internet like punters of eSports betting Australia and as land-based slot machines. Licensing restrictions in certain regions may affect players’ access to Aristocrat’s online slots, but players in regions where this developer is legal can enjoy a number of their games at online casinos.

Some of the most popular Aristocrat online slots are Choy Sun Doa, Queen of the Nile and More Hearts, which players can play for real money at participating online casinos. Some casinos even offer free versions of Aristocrat’s games, allowing players to explore Aristocrat gaming at a closer look before they sign up to play.